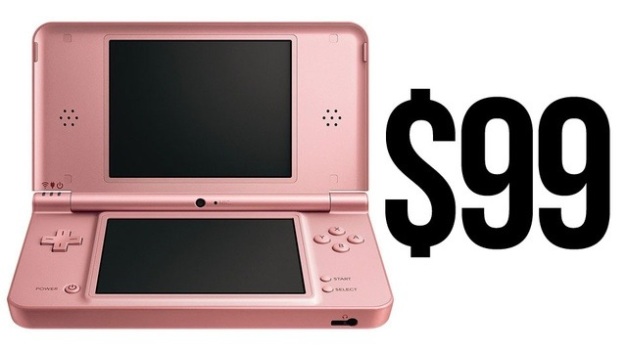 … KOTAKU … reports today that the DSi price will be dropping on May 20th. This is what they had to say.

What a wonderful price point for the DSi to be at. For under $100 gamers old and new will gain access to a digital and retail library filled with more than 2,000 titles, a relatively substantial portion of them worth playing. And $99 is a sweet spot for just about any electronics; one dollar over and you’re into triple digits, but $99? That’s not so bad.

The new price will also help separate the DSi from the newer 3DS in the market. Previously only $20 apart, the $169.99 3DS is now obviously the higher-end product, at least in the eyes of consumers that still subscribe to the notion that the higher the price the better the product.

Why now? Here’s what Nintendo’s official announcement had to say: “The new suggested retail prices provide an even greater incentive to pick up the systems, and provide an easy option for parents who want to introduce younger kids to their first portable games. With graduations looming, Father’s Day approaching and the start of the summer travel season imminent, the new suggested retail prices appeal to all kinds of shoppers.”